Our path from Michigan to Tennessee ran directly through Ripley, Ohio – a little village with a proud history on the banks of the Ohio River.  The Northwest Ordinance of 1787 prohibited slavery in the territories northwest of the Ohio River.  Ohio, therefore, was free.  Kentucky, on the other hand (directly across the river) was a slave state.  On one side of the river a human being was in bondage; on the other side of the river they were free. 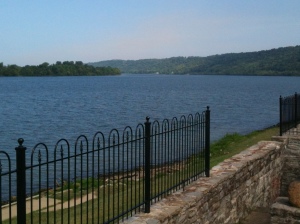 The people of Ripley, Ohio were made of strong stuff.  Led by a prophetic pastor, the Rev. John Rankin, Ripley became a thriving abolitionist town with over 300 members in the Ripley Anti-Slavery Society.  Their proximity to the river and the slave state of Kentucky, together with their bold witness of faith, led them to become an early stop on the Underground Railroad – a network of citizens helping slaves escape north to freedom.

The Rev. John Rankin, pastor of Ripley Presbyterian Church, was considered one of Ohio’s first and most active “conductors” on the Underground Railroad.  From 1822 to 1865, Rankin – along with his wife and children – assisted more than 2,000 slaves in their journey to freedom.

In 1825, Rankin built a house on a bluff overlooking the Ohio River.  Located about 350 feet above the river, the place came to be known as “Liberty Hill.”  There, Rankin and his family were able to signal runaway slaves in Kentucky with a lantern, letting them know when it was safe for them to cross the river and climb the steep hill on their journey north to freedom.  To further assist those escaping slavery, Rankin also constructed a 100-step staircase leading up to the house.  Those fleeing slavery had to cross the river, climb the steps leading to the Rankin House, and remain hidden there until it was safe for them to travel further north, away from patrols looking for escaped slaves. 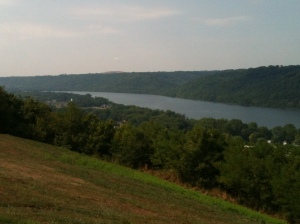 High Above the Ohio River

For over forty years leading up to the Civil War, the Rev. John Rankin and his family were leaders in the abolition movement.  Many of the 2000 slaves who escaped to freedom through Ripley on the Underground Railroad stayed at the Rankin family home.  Rev. Rankin was proud to say, “I never lost a passenger.”  When Harriet Beecher Stowe (author of Uncle Tom’s Cabin) was asked after the end of the Civil War “Who abolished slavery?” she answered, “Reverend John Rankin and his sons did.”[1]

[1]Hagedorn, Ann,  Beyond The River: The Untold Story of the Heroes of the Underground Railroad, Simon & Schuster, 2002.

This entry was posted in Uncategorized and tagged abolition, prophetic witness. Bookmark the permalink.
%d bloggers like this: